This is the Summer for Car Shoppers to “Fly to Buy”

Cambridge, MA, June 30, 2017 – Most used car shoppers search for their next vehicle within their local area. But new research from CarGurus, a leading car shopping website, shows that for adventurous deal-seekers, there are opportunities to save significantly by planning a “Fly to Buy” car shopping getaway. Company analysts say that prices on comparable used cars can vary significantly city to city so it’s possible to fly to another city to buy a used car at a much lower price, drive it home, and still save substantially after travel costs.

For example, data shows that a car shopper living in Albany, NY could save more than $2,000 on a 2015 Ford Mustang if they “Fly to Buy” in Miami versus buying the comparable car in their home town – including the cost to fly to Miami and the cost of gas for the car ride home. A shopper living in Albuquerque, NM can save almost $1,900 on a 2007 BMW 3 Series by flying to buy the car in Dallas – again, flight and gas costs included.

To find the optimal Fly to Buy cars and destinations, CarGurus analysts studied millions of car listings nationwide, comparing local market prices on comparable vehicles to identify the most significant regional price differences. They also factored the average cost of both a plane ticket and the gasoline needed for the ride home.

“Shopping local makes sense for most car shoppers, but the adventurous deal-seeker could find a used car far outside their home region and still see big savings—with the added bonus of a fun summer road trip.” said Lisa Rosenberg, Data Analyst at CarGurus. “Even for less ambitious shoppers, this research highlights just how much variability can exist on used car prices in different markets. Expanding your search area even moderately can sometimes unearth opportunities to save.”

Additional findings from this study and the study’s methodology can all be found below: 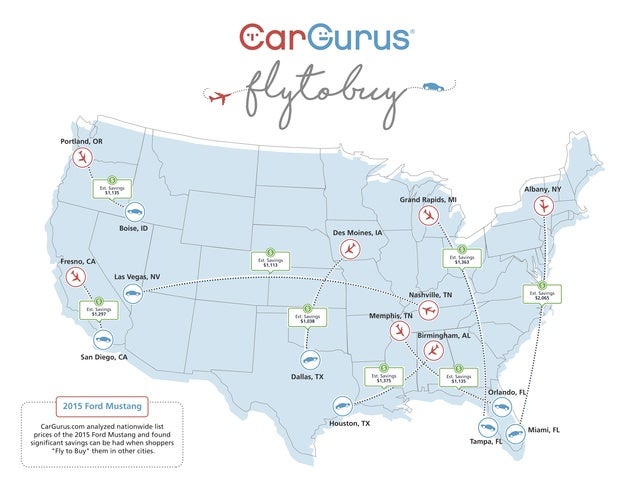 Methodology:
CarGurus compared the Instant Market Value (IMV) data on more than 5 million used cars listed for sale in the continental United States’ largest metro areas. Analysts determined the IMV in each metro area for popular used cars and then compared prices for comparable vehicles between metro areas to identify estimated savings. Calculated “Fly to Buy” savings include the average cost of airfare between cities based on the U.S. Department of Transportation Domestic Airline Consumer Airfare Report, 2016 Q3. The estimated cost of gas is based on AAA’s rate on June 5, 2017. Metro areas are defined as the 50 miles around the city center.